Congresswoman Brenda L. Lawrence has lived in Michigan’s 14th Congressional District, which includes a portion of Detroit as well the City of Southfield and 16 other cities located in Oakland and Wayne counties, her entire life. She was elected to the U.S. House of Representatives in November of 2014. She was elected the Freshman Whip and appointed Senior Whip. She is a Ranking Member of the House Oversight and Government Reform Committee’s Subcommittee on the Interior. She is also a member of the House Committee on Small Business and serves on the Subcommittee on Agriculture, Energy, and Trade and the Subcommittee on Contracting and Workforce.

As a child I always dreamed of growing up to become a champion for our community and fight for civil rights and progressive causes.

This is not just Brenda’s journey, as we are with her. Together we can make a better tomorrow for our children, grandchildren and the future generations to come.

Born and raised in Detroit, Congresswoman Lawrence is a product of Michigan’s public school system. She is an alumna of Pershing High School and, after attending the University of Michigan, she earned her Bachelors of Science degree in Public Administration from Central Michigan University. Before she began her political career, the Congresswoman had a notable 30-year career with the U.S. Postal Service, where she rose through the ranks from the position of letter carrier to human resources executive. 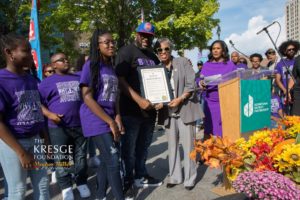 A Love for Local Government

Her prior political career is equally extensive, including her election as Mayor of the City of Southfield in November of 2001, when she became the first African American and the first woman to serve in that post. Prior to her 14 year tenure as Mayor, she served on the Southfield City Council, where she was elected President in 1999. She has also served on the Southfield Public School Board of Education in the capacity as Secretary, Vice President, and President.

Policies don’t have to be Democratic or Republican. When I worked in local government we understood that a pothole didn’t have a partisan answer.

A Love for Family

The congresswoman and her husband, McArthur Lawrence, are the proud parents of two children, Michael and Michelle. They also are the adoring grandparents of one granddaughter, Asya. Asya proudly attends Michigan State University